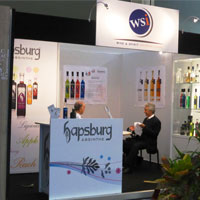 Well, it’s that time of year again…Vinexpo! And whoever said that international travel is glamorous should join me on the 4.25am train to Gatwick for the early morning flight to Bordeaux. On arrival at Bordeaux, we took a taxi to the hotel on the other side of the Lake at the Exhibition Centre, to drop off the cases and set up the Hapsburg Absinthe stand. The ‘normally €59 room’ has more than doubled in price for the show… the bathroom was so compact and bijou that you have to do contortions to get in and close the door!

With halls 100 metres wide and a kilometre long, getting to the Hapsburg Absinthe stand in Hall 3 took a 15 minute walk…this is truly the show of shows for the drinks industry and takes some stamina to attend.

There is still talk among veteran Vinexpo visitors of ‘Le Grand Chaleur’ (the big heat) about 8 years ago, when a fully loaded HGV reversed into the air conditioning unit in one of the halls, resulting in no air conditioning & emergency lighting only, this coupled with outside temperatures of up to 44°C… a catastrophe for stand holders and visitor alike.

This year was the exact opposite, it was chilly and hardly stopped raining for the entire duration of the event. Thunder and lightning was virtually a daily occurrence and many villages in the vicinity were under heavy flood. Each Vinexpo has a different feel and this year, at least in the spirits section, appeared to be the year of the Chinese, all intently looking for aged malt Scotch whisky.

In truth the show could be fitted into four days and the last day is always a day of “Monsieur, I’m a collector of miniatures, can I have …” as well as stand assistants all running around looking for swaps and ‘show plunder’. The smart owners and the vast majority of visitors leave the show on the penultimate day and go home! Yep, we’ll be back in 2 years, still moaning!