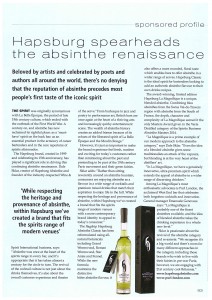 Absinthe has long been a tale of daring that many drinkers and bartenders alike have been trying to get their hands on. Originally made illegal because of its ingredient wormwood, the beloved drink has returned to the market stronger than ever before, and it’s taking the bar scene by storm. It’s been described as having a rich kick that will keep you coming back for more.

Established back in 1999, Hapsburg was one of the first pioneering makers of absinthe as it began its resurgence back into the market of alcohol. With years under their belt of experimentation, production, tasting, and manufacturing, you won’t find a better experience with absinthe than Hapsburg. Not only is it unique in its flavours, but it’s also quite delicious, filling your palate with a flavour that you can’t find anywhere else. It’s become more than just a drink to indulge yourself in when you’re out with your friends; it’s become a unique lifestyle experience that hasn’t been replicated by any other alcoholic beverage on the market.

The variety of drinks that have been created by Hapsburg Absinthe will leave you wanting to try them all. The Absinthe Classic was the first to launch into him Hapsburg line of alcohols, and sports a 72.5% proof, and comes complete with grand wormwood. It has a unique flavour that has been described as being strongly minty, and can either be consumed straight or mixed into a cocktail. The X.C., on the other hand, is a much more intense flavour that combines four flavours of absinthe together to create an exciting blend that not many people can put down, especially with an A.C. of 89.9%. If you’re feeling like you fancy something different and fun, there’s a Hapsburg Absinthe Irish Cream that provides a smooth, rich taste to any cocktail or even a simple hot mug of coffee. You’ll be surprised at the other kinds of drinks and cocktails that can be made from one simple bottle of Hapsburg Absinthe.

Deemed to be one of the strongest absinthe’s on the market, Hapsburg Absinthe has become popular over the years with creating the means to which people can enjoy this long-ago banned drink. It’s the perfect drink for anyone who is interested in ignoring the stigma that is attached to the drink and being daring enough to give it a try. It provides a bold statement to the rest of society with its unique colour, taste, and years of refinement in developing the perfect absinthe.

If you truly want to get a unique absinthe experience that will have you telling all of your friends, then Hapsburg Absinthe should be your first stop in the when going to the Wine and Spirit stores.