A few days ago I had the pleasure to meet up with Carlos Camarena (who many consider to be the greatest living Tequilero), and two of his lovely daughters at Nola Bar in London … the Bar that is so cool it has no telephone number! We love that!

Carlos was giving one of his famous masterclasses on his Tequilas and how he makes them, and so on. After the class we sat down and had a chat about the new Tequila Villa Lobos 10 year old expression being prepared and my visit to his distillery, La Alteña in two weeks time .

Carlos started showing me dozens of instagram photos sent to him from the distillery of what happened ‘last night’ in Arandas… he was visibly shocked. He said “no one went to work today, as they were clearing snow off the roofs of their houses…” , which they worried might fall in, as they were never built to support heavy weights of snow and ice.  “ It looks more like northern Canada, than tropical Mexico! …” 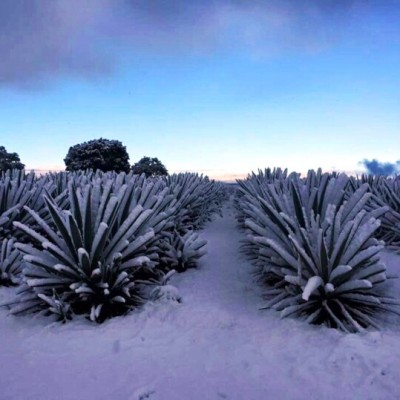 Carlos Camarena’s Agave plantations in Arandas covered with snow in the regions first snowfall since 1990!

Carlos explained that last snow fall in Los Altos was 19 years ago, and that was only 1 cm of snow and consequently the price of agave increased from below one peso to around 17 pesos a kilo… and of course Tequila prices rose dramatically as a result ; it generally takes around 6 – 8 kilos of Agave ‘pina’ to make one litre of 100% agave.
As a result many brands disappeared from the market and many distilleries closed down as they couldn’t buy Agave to distill.

And to make the point, before the 1997 snow, the previous time it snowed in Los Altos was 130 years earlier ! He emphasised that the last snow then was just 1 cm thick… this time the snow is around 10 cm thick.

The pictures are self explanatory!…10 cm of snow piled up in Arandas!

Carlos not only grows agave for Villa Lobos brand and his other 4 brands but also supplies many other distilleries with agave, including some very famous name brands. That may have to stop, once the extent of the damage is assessed.The agave takes on average 7 years to grow before being cropped. This night of snow may have ramifications lasting years into the future . 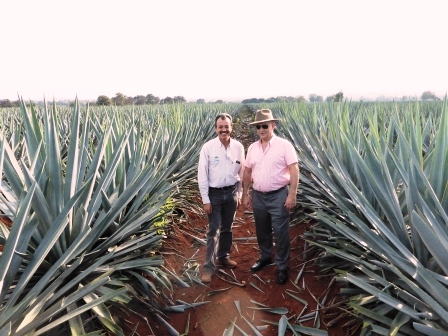 Dale Sklar and Carlos Camarena, only 3 months earlier in the same agave fields

Over the last two years, we have seen the see-saw value of agave going from below ½ peso (so that it was cheaper to let it rot in the fields, than harvest it, unless one needed agave of course) to around 7 pesos a kilo… the common wisdom varied between the big brands are so stocked up that the present high price can’t last and prices will fall again, to the shortage will only get worse and prices will continue to rise. In 1997 prices went up to around 17 pesos per kilo and more. So there is benchmark to watch out for. Back in 1997, while returning from a week in Jalisco, I wrote an article called Tequila in Crisis, which resulted in about twenty radio interviews and two BBC TV interviews. I am worried this next article might need to be entitled, Tequila in chaos…  who says the climate isn’t changing !

So far all is well and we remain very positive. If there are ramifications they will take time to appear. The demand and supply for Ultra-Premium Tequila is good and sturdy but with agave products , one never really knows…