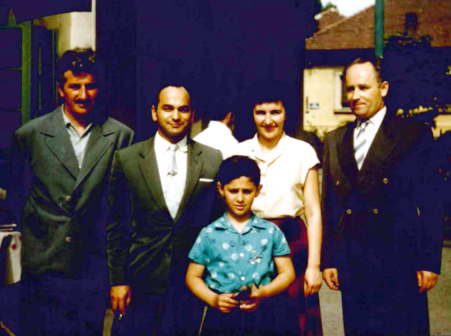 1955 … I remember as a 4 year old kid being taken to my Dad’s bottling-hall to join in with the family efforts to deal with the Christmas rush. I was expected to help on ‘the bottling line’ under the railway arches in Bermondsey, near to London’s East End. I was shown a device made up of two taps, and my job was to put one bottle under one tap, and turn off the other tap ; then quickly remove the full bottle, put a cork on the top of the bottle, whack the cork in tight with a wooden mallet, and repeat the same with the other bottle being filled, and so on and so on…

This initiation into the Wine Trade earned me 3 pence an hour (equal to about 1 new pence), but at four years old in 1955, that was my first wage !

I didn’t realise it at the time, but this was the planting of the seeds of the 5th generation of Sklars in the liquor trade.   As far back as we can discover in 1850’s my Great Great Grandfather was known as ‘Rebbe Itzik’ who had a ‘Patwal’ (cellar / distillery) in the Town of Widze (which was then a part of Russia).

He brought his Son, (my great Grandfather) Louis Sklar, into the distilling business who eventually left Russia in the early 1890’s for a new life abroad.  Until recently we thought he came direct to London, however we found a letter written in Yiddish, saying “… it’s very cold in Turkey and there was little work…”. We always assumed it was some version of ‘Fiddler on the Roof’, which prompted him to leave all he knew… his home , distillery, friends & family and travel to foreign lands where he couldn’t speak a word of the language and try to establish himself… we’ll never know now. It obviously didn’t work out in Turkey and he then came to London in the late 1890’s, bringing as a 3 year old, my Grandfather, Max Sklar to UK.

We know as a young man Max Sklar lived in Cardiff and became an apprentice watch-maker, but then he switched profession back to the Family tradition of Wines & Spirits. He moved to London’s East End where he plied his trade until his shop was destroyed in the London Blitz in World War 2.

Undeterred, He then moved away from the daily bombing in London, to Leicester and carried on there until his death in 1966.

Max’s Son, (my Father) Stanley, left the RAF after the end of WW2 and with some help from his Dad, became a Wine & Spirit merchant in North London. In those days just after the end of WW2, most of the merchant fleet, was under the sea, sunk by German U-boats, and most food and drink (especially luxuries like eggs, cheese, meat,wine  & whisky ) was rationed.  He would have ‘beg’ his Dad for perhaps 3 or 4 bottles of whisky a week, to sell. If his Father had a few bottles unsold in any week, he would allow my Dad to collect them and sell them in his own London shop. It’s hard nowadays to imagine living with such shortages and ration books.

… It was a very different world then … more next week …