By Dale Sklar, written in December 2000.

Things have changed immensely over the years with Tequila. I first visited Mexico in 1969 as a youngster fresh from Christs College Finchley, having just gained some rather lackluster A levels . Those were the days when grade A’s were the exception …

My Dad had been importing Tequila from Alfredo Gonzalez of Eucario Gonzelez sa for very many years and I was sent out to represent the Company, as no one had been to see our Suppliers in many years. 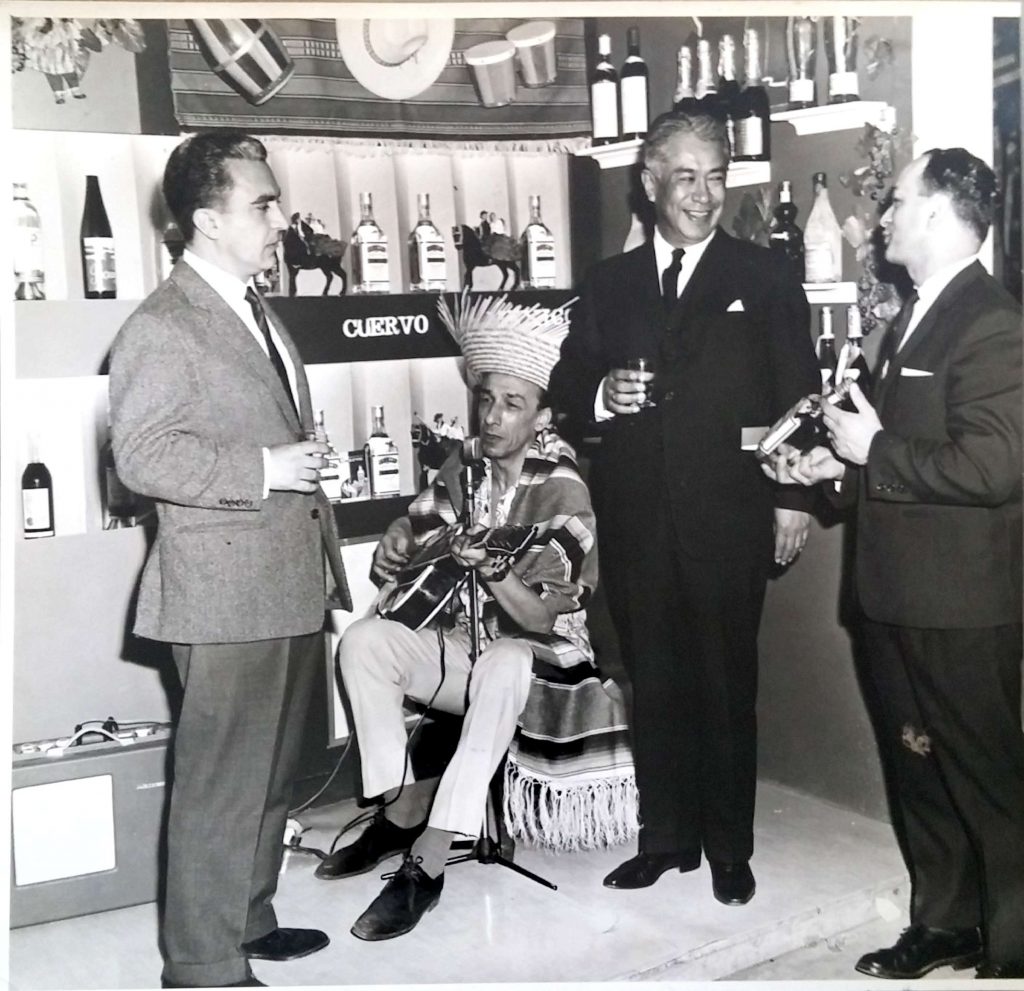 My First visit to Guadalajara, Mexico

It turned out to be a rite of passage and a beginning of my love-affair with Mexico in general and Tequila in particular. Everything was new and strange. I was booked into a hotel in down-town Guadalajara, opposite the giant Minerva statue. In the square were horse and buggies, fire eaters, fire blowers, serenading mariachis, kiosks selling every type of spice , tacos, snacks, fruit squashes, even powder potions to secure a lover or to put a spell on a mother-in-law… it seemed like a scene out of a Fellini film.

Next day I was collected by Alfredo’s son, Rodolfo (now a very successful Tequilero with his own distillery) and driven to see the Agave plantations in his pick-up truck with huge tyres ~ everything seemed so macho.

Looking in the wing mirrors, I saw clouds of dust following our truck and I half expected to see Pancho Villa at every whitewashed church we passed. Most of the men wore the cuban heeled cowboy boots and the classic white stetson sombrero with a little tassle hanging behind, presumably to swish away the horseflies.

As we roared along the stoney roads towards the town of Tequila, we’d pass men on horseback, often with a little dog running behind … a pace of life 100 years behind the swinging 60’s London I had just left behind.

I asked Rodolfo about the pistol in his glovebox and he just smiled like to say, ‘ … you never know …’  .

We drove past rolling hills of blue agave plants with their menacing brown spikes … wondered about skydivers and parachutists !

Eventually we arrived in town and drove past the statue of Mayahuel, the Patron saint of Tequila, and a few minutes later we arrived at the distillery.

As we drove through the gates, there was a group of five mariachi dressed in their classic black jacket and tight trousers with silver studs , playing la Cucuracha to welcome me as a guest to the distillery.

I then got the standard tour of the harvested agaves, the stone ovens where they’re steamed prior to shredding on the milling machine. Later we saw the fermentation tanks, stills & distillation tanks, bottling line etc.

In those days, there was little mechanisation , just lots of old ladies with deeply lined leathery faces who looked up to see ‘the visitor’ breaking up their mind-numbing labour of hand filling and labelling Tequila bottles.

I was then presented with a hollowed-out sheep’s horn full of warm tequila taken straight out of the still at distillation strength of 55% (110 US proof). At 18, I was thus initiated !

I’ve been back to Guadalajara many times since then and watched it change from what seemed like a scene in a Cowboy film,into the 21st century, with skyscrapers and traffic jams, smog and fast rising crime rates. Most of the horses are gone now and fewer and fewer men wear their cowboy boots & sombreros. The huge tyred pickups have mostly given way to Japanese compacts & most Mexicans are drinking rum & brandy as their spirit of choice, rather than Tequila.

Tequila in the Millennium and how Mexico has changed

In Mexico, domestic tequila sales are of a low order and static to falling. Over the past few years, the cost of tequila has see- sawed due in part to the wildly fluctuating price of the agave used to make tequila.  Several years ago, the price increased within the space of just months, from 4 pesos a kilo, up to 17 pesos, and now just a few years later, it’s back to 3 pesos a kilo. It didn’t help the tequila producers that the government increased alcohol taxes, at the moment that prices of bulk tequila rose by nearly 500% . This naturally had adverse effects on exports.

In desperation, certain famous brands even switched from 100% unblended Tequila to ‘mixto’ or blended, to bring prices down  … imagine if Glenfiddich  pure malt whisky were to switch to become a blended grain whisky as the price of grain quadruples… a brand-owner’s nightmare.

Suddenly the agaveros (agave growers) were coining it, but of course it couldn’t last. Everyone both inside and outside the official Tequila zones seemed to be planting agave, to take advantage of the 460% increase in price of a kilo of the raw material. Now a few years later the price has crashed  back to 3 pesos a kilo (around 25 US cents). Probably only in the 3rd world would a farmer grow a crop which takes  on average 8 years to mature, cut it down and obtain 25 cents a kilo before replanting and waiting another 8 years for his crop ! If the French had to produce cognac in this way, a bottle would probably retail for around £80 a bottle.

When you next pay £13 – £15 for a bottle of Cuervo Tequila, spare a thought for the poor agavero.

For years the Tequileros have been talking about increasing the protection of the name,’Tequila’. In practice, in the past all sorts of mixtures and blends have been sold and given Mexican sounding names using  the cachet of the Tequila name to gain sales. A few years ago, while shopping in Sofia, I bought some genuine 100% Bulgarian ‘Tequila‘ with the odd sounding brand name of ‘Court of St James’ ! It hadn’t been within 5000 miles of Mexico. With such abuses of the category name in mind, the industry set up its own organisation to police all aspects of Tequila production and marketing ; the CRT (consejo regulador tequila) funded by the tequileros according to their size.

The organisation has had it’s failings but over the years, it’s got teeth & shut down many a distillery for varying periods (clausuras), when infractions were discovered, thereby helping to improve and protect the reputation of the category. And yet still the abuses continue … about three months ago I received a telephone call from Johannesburg from a merchant offering me South-African Tequila ! When I pointed out the error of his ways, he explained that it was made from the same blue agave plant as used in Mexico, and that actually it grew better and more prolifically in South Africa ; ” … perhaps , but it’s NOT Tequila !”

About two years ago, the CRT announced that in future all Tequila would have to be original-bottled in Mexico. Hoorah, but within a few months, the initiative had withered and u-turned under pressure from the big American and European importers of bulk Tequila…  a pity. Mexican Tequila doesn’t quite so Mexican when it’s diluted from distillation strength of 55% to bottling strength of 35-40%, with water from Hamburg or Alsace or even  Colchester. The French fiercely guard their ‘appelations d’origines’ ~ just try buying a tanker of bulk Cognac for overseas blending and bottling … ” Non !”.

So why can’t the Mexicans protect their world-famous beverage better ? Possibly the answer lies in the fact that most of the ‘family silver’ has been sold off to the gringos and other overseas buyers. Sauza Tequila belongs to the British Allied-Domecq, Cazadores Tequila  to Bacardi, Viuda Romero Tequila  to the French Pernod Ricard, Don Julio Tequila  to British Diageo Group, 50% of El Tesoro Tequila  to Jim Beam Bourbon, and large chunks of Orrendain Tequila  to the Americans, and the list goes on and on … One can look at the British car industry sell-offs to overseas buyers, to see the possible long-term results of selling the great Tequila names abroad.
If Tequila is ever to achieve its destiny and overcome the ‘1 Tequila, 2 Tequila, 3 Tequila, Floor !’ slammer image, it will need to recapture its true Mexican heritage & national pride. It will take young Mexicans supporting domestic Tequila sales with the same enthusiasm that Brazilians show for their Cachaca ,  or Scots for a wee dram.

In the meantime, Tequila, especially the high end 100% agave category, is one of the most underpriced spirits on the market at around £20 a bottle for a bottle that took around 9 years to be produced. Caramba !