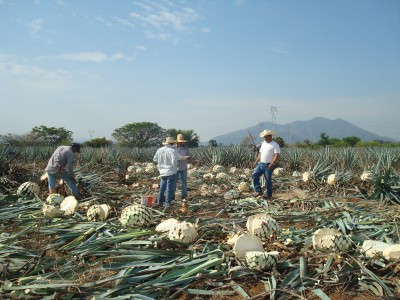 The Magic of Tequila

June 4th 2013, I departed the chaos that is London Heathrow Airport for the first of my twice-yearly visits to Tequila Town, Mexico to visit our distillery partners and find out what’s going on (or not!) and attempt to move various projects forwards. If you don’t visit, you are told what they think you should hear, not necessarily what you need to know!

Travel options are either BA to Mexico City, then collect cases and check in for an internal flight to Guadalajara, or BA to Dallas & Dallas to G’jara, with luggage going straight through to the final destination. That sounds easier, however the internal 1.5 hours wasted at Dallas passing through immigration (which should be completely unnecessary for ‘in-transit’ passengers), is infuriating as is waiting to go through customs with only hand luggage…as the cases have already been sent on to end point. I mentioned this to the customs man there and he quipped, “Please write in, they don’t listen to us!”

I stayed as usual at Hotel Tapatio, close to Guadalajara Airport, and about 15 minutes drive into downtown G’jara. I’ve been staying there for over 30 years and despite staying at other hotels, there’s nothing to touch this place…nothing! 15 metre long bedrooms with large outside balconies overlooking the hills surrounding G’jara, and at night, it looks like you’re in an aircraft with the millions of lights of Guadalajara below you. I always add a day on to the end of the trip to relax and spend the day writing up the notes and e-mails on the outside balcony eating Mexican snacks and drinking their lovely Veracruz coffee…as well as ‘using up’ any Tequila I can’t carry with me!

Mexico has become a dangerous place and if you are in the wrong place at the wrong time, you can be one of the hundreds caught up in the crossfire between the various narco-trafficantes! A few years ago the Government attempted to take out the lion tamers, and now the lions are wandering around trying to re-establish their territories, by showing who is most fierce and most dangerous. On more than one occasion my supplier has insisted that we conduct our meeting at the hotel instead of driving into town, where  “… last night, 24 people were shot dead by [to remain unnamed drugs baron]…”.

Mexico has always been a little wild, and that was it’s attraction, but now heads on poles and random violence for no sense, makes it a different kind of experience! Tourism is down and there’s a job to be done to get it back to where it was. I think the only solution is to legalise all drugs and take the violence, huge money and corruption out of the industry in one hit, excuse the pun. Nearly a century or applied sanctions has totally failed to achieve its ends and no one seriously expects anything different. The drugs money is so big, that anyone can be bought to look the other way, and so it continues…

And I hope to continue coming to this troubled zone, as the magic of Tequila keeps drawing me back.